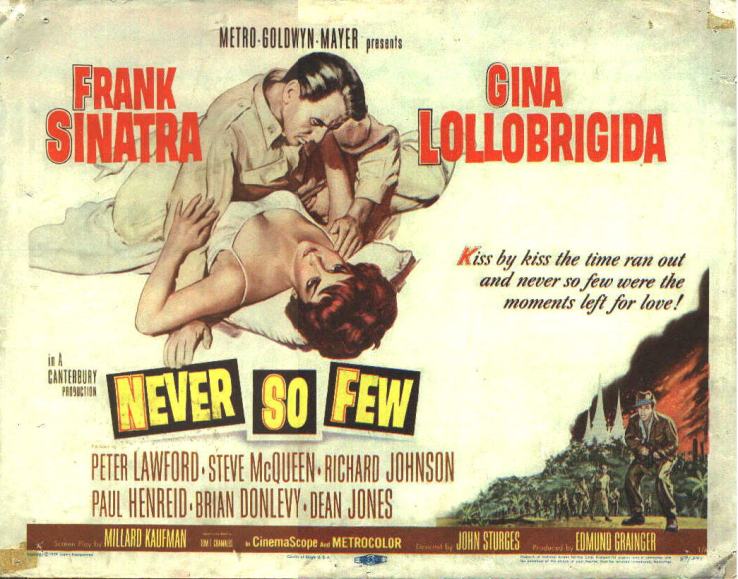 NEVER SO FEW—–WW2 story, set in Burma. Though inspired by the exploits of a real outfit, this is pure ripe pulp; colorful and watchable along with being phony, ridiculous and forgettable. Frank Sinatra, as the Allies toughest, most no-nonsense commando leader, carries out raids against the enemy, lurking in the backlot studio jungles. When on leave, he takes time to make time with a politically connected temptress. 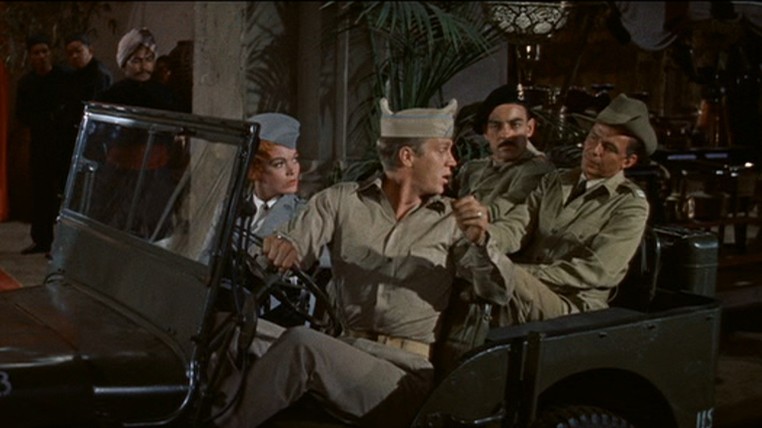 The morale-stiffener is played, with breasts heaving, by Gina Lollobrigida. Sure, who else would be lounging around Rangoon during ‘The Big One’? Her presence is one of several glaring canyons in the script, which spews out as many clichés as the heroes do bullets. Her scenes with Frank are fully unconvincing. The dialogue is salty tripe, hilarious at times because it’s so obvious.

“I like mature men, Captain Reynolds. They ripen a girl…if you know what I mean.” 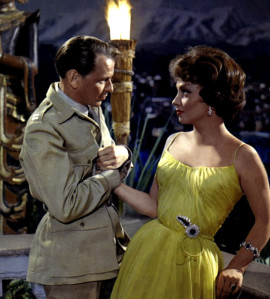 Lots of rattling machine guns and flaming explosions during the action scenes, directed with some flair by John Sturges. The color is bright, and each of Sinatra’s troopers gets to wear a distinct get-up, ‘cuz these guys are mavericks who don’t bother with such non-cool jive as regulations, discipline, respect for superiors, etc.

The actors here are all pros, and they can’t be held responsible for often drawing snickers–it’s the fault of the terrible scripting, which was re-done mid-production by the studio, gutting its political lean and focusing on the absurd romance, leaving Sturges flat-footed trying to handle it and his high maintenance A-listers.  Sinatra favored a one-take approach, Gina would go by the score. When he mentioned that his previous leading lady had been another Italian sex goddess, Sophia Loren (in The Pride And The Passion), Lollo exploded with “Sophia Loren!  Sophia Loren!  I’m a thoroughbred race horse next to that donkey!”  No love lost, one surmises.

The most watchable member of the outfit in this 1959 caper is Steve McQueen, making the most of his first substantial role in a major film. He got the part when Sammy Davis Jr. was axed after upsetting Frank (not a good idea). His tight delivery and natural way with props did not go unnoticed, and his next role was in the classic The Magnificent Seven (also for Sturges, who was dead-on handling that one). 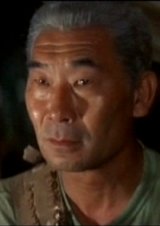 Fighting the writing as best they can: Richard Johnson, Peter Lawford, Paul Henreid, Charles Bronson, Dean Jones, Philip Ahn, Robert Bray, Brian Donlevy, Kipp Hamilton, Whit Bissell and John Hoyt. Uncredited in bit parts are James Hong, George Takei, Mako (his first gig, at 24) and William Smith. Hugo Friedhofer’s score is not bad, and William H. Daniel’s cinematography is a plus. The picture went over-budget, mostly thanks to tardiness from the stars, and its mix of location work from Ceylon, Burma, India and Thailand with studio mockups. Costing $3,480,000, it brought back $5,270,000, 27th for the year. “You’ve taken up with a no-good G.I… who’s gonna’ keep you barefoot and pregnant and on the edge of town. We’re gonna’ be married. I’ll be back. Learn to cook.” (ouch)

The reviewer for the NY Times bonked it on the nose: “There is no way to measure this picture with a yardstick of pure intelligence.It is a romantic fabrication by which intelligence is repelled.” 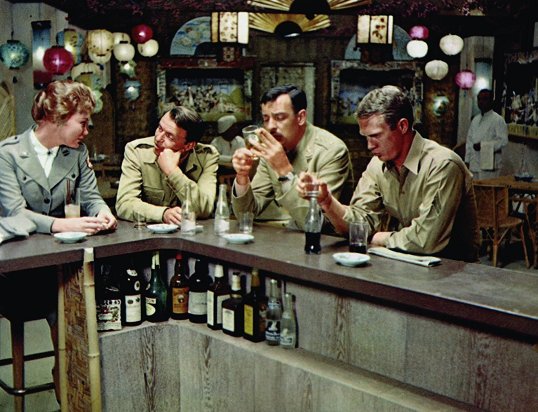 * The wretched screenplay was cooked by Millard Kaufman, Irving Ravetch and Harriet Frank Jr. It was based on a best-seller of the same name by Tom T. Chamales, who had witnessed versions of the movie’s action while serving in Burma during the war, commanding a unit of Kachin soldiers like that of Sinatra’s outfit. For more on the brawling Chamales, read the review of Go Naked In The World. 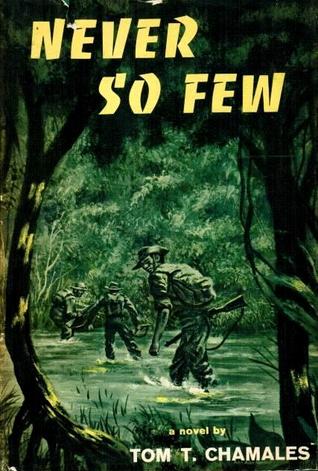