Elvis forgets what he told Stanwyck about daughter

ROUSTABOUT  rolled into undefended theaters in 1964, following Kissin’ Cousins and Viva Las Vegas.  In this 16th Elvis opus, a rather surly Presley goes to work for a carnival, run by Barbara Stanwyck.  He romances her daughter (Joan Freeman), belts out 11 songs, and gets to tangle briefly with a lout (Steve Brodie, good as ever, and underused: he’d already performed a similar gig in Presley’s Blue Hawaii), swap passes with naughty Sue Anne Langdon, ride a motorcycle and do typical Elvian business. 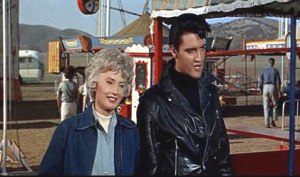 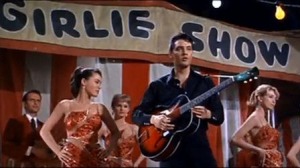 Not great material, the old hat script is competently directed by John Rich, using up 101 minutes and throwing checks to Leif Erickson, Pat Buttram, Joan Staley, Dabbs Greer, Norman Grabowski, Jack Albertson, Billy Barty and a couple of uncredited ‘college girls’ named Teri Garr and Raquel Welch.  Quick eyes may spot future Bond nemesis Richard Kiel and the movies most famous car washer, Joy Harmon (Cool Hand Luke).  It was successful, coming in 29th for the year with a $6,000,000 take. Lucien Ballard did the cinematography, so it all looks swell.

Of the songs, the title tune and a slinky version of the old Coasters number “Little Egypt” make the cut. That saucy dancer in the latter is Wilda Taylor, who reminisced  “We rehearsed for about two weeks. Elvis was in and out of rehearsal hall every so often between his other busy filming days for the other scenes. He knew his material and music well, and I grew to admire him a great deal. It’s amazing, through the years, how many people know about me and Little Egypt from that film. Oddly enough, I really didn’t know much about Elvis before we worked together, but I found him to be a lovely, darling person, and I was just pleased to be a small part of his life.” 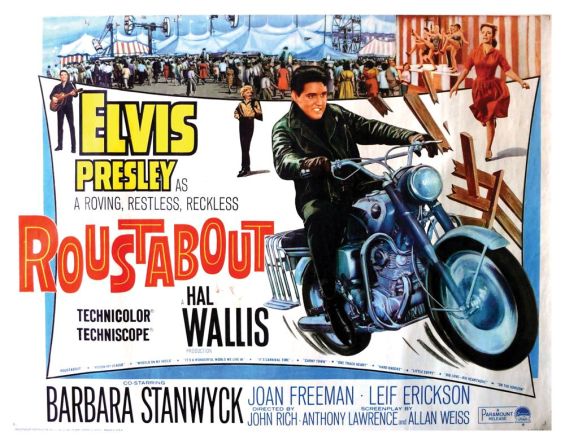