LIONHEART takes some heavyweight talents—director Franklin J. Schaffner and composer Jerry Goldmith—and gives them a potentially exciting story, then kills it with cheap production values and lame supporting players. The studio deemed this unreleasable in 1987, so it was shelved, until they dumped it on video.

Set in the time of King Richard, it’s about a young knight (Eric Stoltz) who gathers a group of children and forms a mini-crusade. The kids run afoul of ‘The Black Prince’ (Gabriel Bryne), fall in love, kill some bad guys, put viewers to sleep.

Filmed in Hungary and Portugal: neither get highlighted. Not even Jerry Goldsmith can save this. 104 minutes long with Nicola Cowper, Dexter Fletcher, Deborah Moore, Nicholas Clay. Read a book on the period, be glad you weren’t around in 1220. 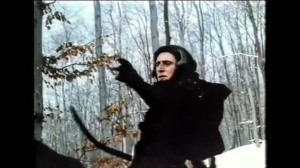