Glossy $1,200,000 production values, courtesy of David O.Selznick, with some peachy-keen views into 30s moviemaking, backed by a syrupy Max Steiner score.  Gaynor is fine as the hopeful actress, but it’s the excellent work from March as her alcoholic counterpart that will keep you watching. While the 1937 trappings have dated, his acting holds up remarkably well, almost as good as James Mason’s bravura 1954 turn, and far superior to Kris Kristofferson’s 1976 shot. 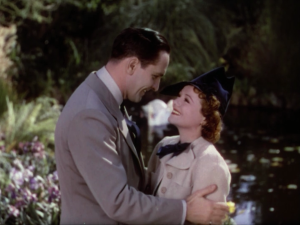 Directed by William A. Wellman, who’d conceived the idea based on the real-life dramas of people he’d known in the business. Three teams of writers worked on it. Dorothy Parker, Alan Campbell and Robert Carson received screenwriting credit. John Lee Mahin wrote the final scene. Budd Schulberg and Ring Lardner Jr. did some ‘trouble sooting, and there were contributions from Ben Hecht and Adela Rodgers St.Johns. Among those who were used as models for the self-destructive characters were John Barrymore, Frank Fay (married to Barbara Stanwyck), John Bowers and John Gilbert. The model for the Lester-Maine marraige was that of Fay & Stanwyck—she finally left his alcoholic insanity in 1935 after seven years of dealing with him.

The 111 minute result was awarded Oscars for Story and a ‘special’ one for its color cinematography, which was the first use of 3-strip Technicolor in a contemporary setting. It was also nominated for Best Picture, Actor (March), Actress (Gaynor), Director, Screenplay and Assistant Director (Eric Stacey).  As for receipts, a $4,400,000 take tallied 30th for the year.

Wellman ensured camerman W.Howard Greene made ample use of Hollywood landmarks, including Grauman’s Chinese Theater, the Trocadero nightclub, the Biltmore hotel, the Hollywood Bowl, the Brown Derby restaurant, as well as Malibu, the Santa Anita racetrack and Beverly Hills. 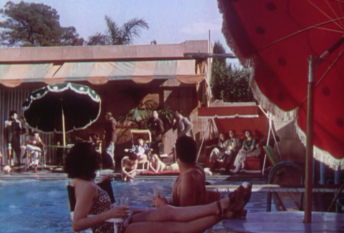