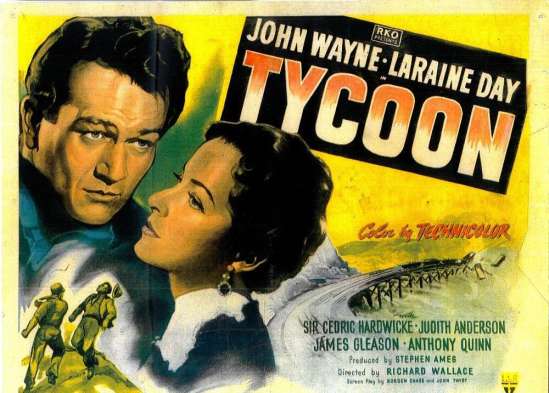 TYCOON is a nicely produced 1947 adventure drama set in the Andes, which finds two-fisted, single-minded engineer John Wayne surrounded by hassles; from his wife, his father-in-law, his crew and his temper. Unfortunately, the glossy package is the only worthwhile thing about this sluggish 128-minute dud, which is badly acted by almost everybody and written like a comic-book. Wayne and Laraine Day try to outdo each other giving lame performances.

Why did I sign on to this banana peel?

Directed (poorly) by Richard Wallace, the expensive production ($3,209,000) was hampered somewhat by Ms. Day’s recent marriage to Leo Durocher, the feisty manager of the Brooklyn Dodgers. Day, a Mormon who neither drank nor smoked, and Leo “Nice guys finish last” seemed an odd combo. Be that as it may, the jealous Durocher sat glumly, day after day during the filming, nervously watching Wayne try to play love scenes with his new wife.

Classic comment on this turkey (which posted a loss of $1,075,000) came from critic James Agee: “Several tons of dynamite are set off in this movie; none of it under the right people.”