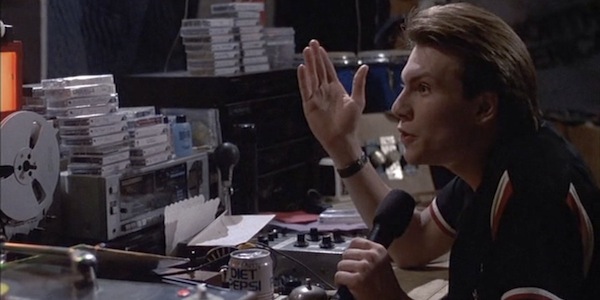 PUMP UP THE VOLUME —“Talk hard! ”  I stayed away from this for some time (it came out in 1990), thinking ‘spare me,another angry teenager movie’, and I guess I felt like many people finally making a sort of bastard peace with high school, I didn’t know how much more could be bled from the dislocation of grades 9 through 12.

Plenty, as this dead-on piece of 90s spindrift hurls at us. Set in an Arizona ‘model’ high school, named after Hubert Humphrey, this tells the outlaw tale of a pirate of the airwaves, a phantom DJ who tells it like it is for teens, even while the real-life plight of the ‘voice’ is one of painful shyness and alienation.

Marvelous acting from Christian Slater, sharply directed by Allan Moyle from his own terrific script. The class of believable kids helps make this into an ace of a sleeper. Good rock score. 102 minutes, with Samantha Mathis, Mimi Kennedy, Scott Paulin, Annie Ross, Seth Green, Andy Romano, James Hampton. Would make a good triple-bill with Heathers and The Breakfast Club.