The EGG AND I  was a big-time hit in 1947, its $5,500,000 take placing it in the number two spot of the years rankers. Based on a successful book by Betty MacDonald, the dated but pleasant comedy is about city-folks Claudette Colbert and Fred MacMurray, who move to the country to make a go of it as chicken farmers.

Timing from the two stars is sharp (it was their sixth team-up, so they had it down), but the film’s chief appeal and place in cinema posterity resides in the introduction of Marjorie Main and Percy Kilbride as ‘Ma and Pa Kettle’, and their tribe of wild young’uns. Main is just a kick, and her earthy matriarch was nominated for a Supporting Actress Oscar.  Main and Kilbride’s funny but loving characterizations of the rural Ozarkian’s spawned their own series, and ‘the Kettles’ headlined nine more movies, cheap but popular yockfests from 1949 through 1957. 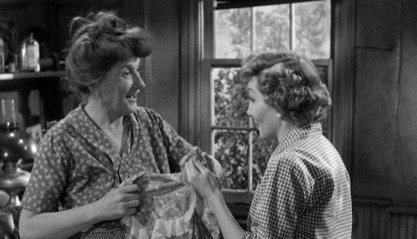 This was directed by Chester Erskine, runs 108 minutes and the cast is rounded out by Louise Albritton, Richard Long, Ida Moore and Donald MacBride. Long was only 20 here, entering films just out of high school (my late brother-in-law went to Hollywood High with ‘Dick’), and would have a lengthy TV career in series like Bourbon Street Beat,  77 Sunset Strip and The Big Valley. He had heart problems, passing away at age 47. Aside from giving Long a credit, and the Kettles a forum, this oldie was the inspiration for Green Acres.