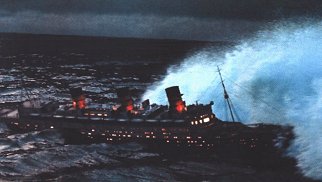 Relax. This is the captain.

THE POSEIDON ADVENTURE  was thoughtfully launched upon a disaster-starved audience in 1972, churning up #2 for the year (demurely behind The Godfather, possibly saving Irwin Allen having to remove a horses head from his mattress). If you adjust its take for inflation, the movie gulped down a staggering $317,000,000, and came up with a rowboat full of Oscar nominations, winning two. Ye gads!

Critical brickbats did nothing to stem its wake, so a few more torpedoes from me can’t hurt anything, but before we keelhaul this crew we’ll permit ourselves a sermon. Not everyone who watches movies has a P.H.D., and it’s often easy for reviewers and couch-wags to ignore that millions of kids want to fill up their afternoons with a little fun. Movies like this fill the old escapism niche far more honorably than sadistic slop like Saw 4. That pronounced, let’s proceed with the scuttling.

To start, even for grown kids this has some pleasures: the special effects of the tidal wave capsizing the ship and the resultant underwater explosions were once-upon-a-time fairly cool, John Williams score is suitably ominous, and the basic plot is certainly as intriguing as it is farfetched. It’s on the pesky human level that this takes the deep six, with the deck stacked against survival.

All-star emotothons like this can be fun with folks like Gene Hackman, Ernest Borgnine and Stella Stevens aboard, but they can be close to death-by-red-ants when the camera is on schmucks like Red Buttons, hit list rodents (I mean,’cute child-star’) like Eric Shea and windy hams such as Jack Albertson and Arthur O’Connell. The screaming from Carol Lynley and Pamela Sue Martin is balanced somewhat by generous views of their legs (good call, Irwin), but two hours of their shrieks would be a vacation in Fiji next to five minutes of Shelley Winters. To some, her performance here was a moving one, deeply felt. Well, it provokes a movement from deep within, that’s for sure.  As long as I’m striking her with an oar, let’s drop the gallant act and sniff that with her on board, it’s a wonder the Poseidon ever got out of dock, let alone into the middle of the Atlantic.

She somehow chomped one of the Oscar nominations, for Supporting Actress (won by Eileen Heckart in Butterflies Are Free). Given a ‘Special Achievement Award’ for its visual effects, it also won Best Song, for the How-Can-We (please)-Forget number called “The Morning After.”  Nominated for Cinematography, Music, Art Direction, Film Editing, Sound and Costume Design (pile it on, Academy, why don’t you?).

With Leslie Neilsen, Roddy McDowall, Bob Hastings and John Crawford. Directed by Ronald Neame. 117 minutes. Hey, I’m not really so mean—I liked it when I first saw it, and I was seventeen, old enough to Know From Dumb (i.e. the wave coming across the ocean like that).

Can I decide who lives?