THE BUDDY HOLLY STORY  is an enjoyable biopic of the late, great 50s rocker, given glory by the efforts of its three leads—Gary Busey, Don Stroud and Charles Martin Smith: they play their own instruments and sing Holly’s classics without resorting to dubbing.  It’s a polished coup that brings the enterprise enough heart and charm to match its subject and his famous songs.

The story takes Holly & pals from obscurity in Lubbock, Texas to rejection in Nashville, on to fame in New York, thence into legend via tragedy.  The script uses a conventional rise-to-fame approach, and invents incidents to propel the plot. That gambit ticked off the surviving ‘Crickets’ enough that they sue’d for defamation.

Gary Busey—-gangly,energetic and sincere— is terrifc, and copped a happy, left-field Oscar nomination for Best Actor. He was a decade older than Holly, but the legendary Busey-excesses lay in the future, and in shedding 32 pounds to aid his consistent fervor, Gary nailed it so as to ‘Not Fade Away‘.  The movie won an Oscar for its Score Adaptation, and was nominated for Sound. It would make for a fun triple-bill with Lou Diamond Phillips’ La Bamba and Kurt Russell’s Elvis. 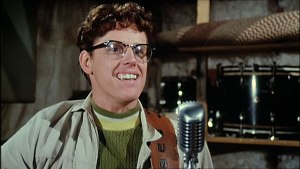 The great Holly tunes are scattered throughout, with two sequences standing out for their foot-stompin’ vitality.  One is the band’s opening gig at Harlem’s Apollo Theater: racial barriers fall and spirits soar.  The other is the finale, with Buddy, The Big Bopper and Ritchie Valens creating a tornado of good vibes at Clear Lake, Iowa, a few hours before their fateful plane crash on Feb. 2, 1959.  It had only been 18 months since Holly’s first song hit the charts: time enough to forever secure his chair in Rock ‘n’ Roll Valhalla.