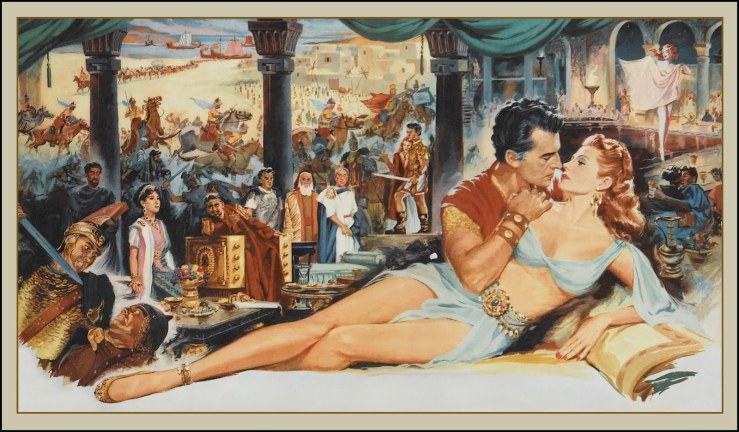 SALOME  boasts an estimable cast in hands-down tripe about Herod and his clan and their tribulations over John the Baptist. Directed by William Dieterle, it’s a drag, with no action, little in the way of scope during 103 minutes, just lots of blathering.

It does contain several moments of unintentional comedy from the cast, exhaling the helium passing for a script. Rita Hayworth, as the title vixen, comes off regal next to Judith Anderson, just terrible as Queen Herodias (aka Mrs. Herod). Charles Laughton seems to have a little fun, floating around the palace as the Empire’s leading degenerate.

Stewart Granger is the good guy, Alan Badel is the Baptist, Cedric Hardwicke is Tiberius. The costume department earned their keep in this 1953 screecher, lots of bright togas and robes in evidence. Save yourself an hour and a half by just peeking at the last fifteen minutes, when Salome does her Dance of the Seven Veils. 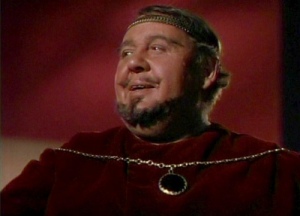 In this movie,she does this to save John the Baptist–the Bible had it all wrong! The best and worst of the film is represented here, as Daniele Amfitheatrof’s score swirls exotically, Rita writhes, jumps and undulates her way out of veil upon veil–it’s somewhat of a turn-on since the red-maned star is provocatively lush. While she’s doing this strip (funny how these are allowed in Bible movies), Laughton pulls the slobber stops and gets a case of the Royal Horns. Anderson malevolently awaits the outcome. This sequence is decadent enough to be both funny and sexy, worth a look—just don’t waste your time on the rest of the film hoping for similar spiritual uplift. It was the #8 feature film moneymaker for its year, grossing $14,400,000.