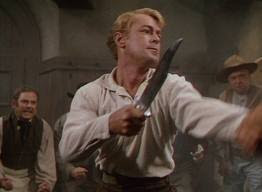 THE IRON MISTRESS  was a famous novel by Paul I. Wellman, about the busy life of frontier rascal Jim Bowie.  The movie is resoundingly bland, dealing with his escapades around New Orleans, prior to hot-footing it to Texas and eventual martyrdom.  Scant justice to a mysterious, exciting figure—and uh, let’s just leave out the slave-trading ‘escapades’….

Alan Ladd is the wrong choice for Bowie, physically and emotive-wise, and Virginia Mayo is boring as his temptress.  The ‘mistress’ is the famous knife, and a couple of Bowie’s legendary blade-brawls are well-staged during the second half of the slow-moving 110 minutes.  They provide the only charge in Gordon Douglas’ direction, which includes a Louisiana horse-race obviously shot in the hills of southern California.  Unless/until You Tube yanks it, watch the quite amusing trailer.

I like Ladd, and he could project a quiet lethality, but he doesn’t give out with much energy or authority here (qualities Bowie had in spades).  Three years later an equally stiff Sterling Hayden took on the role in The Last Command, a markedly better movie than this (aside from Hayden’s less-than-sterling hero).  Jason Patric probably came close to the mark in 2004’s The Alamo, but for this Alamo fanatic the go-to-knife-fighter will always be Richard Widmark in the 1960 epic. 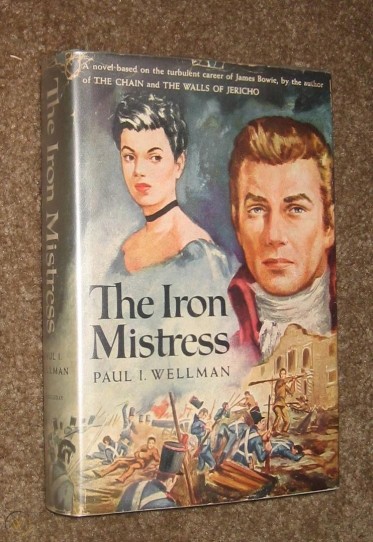