THE CHASE  is a fascinating fraud: hard-breathing trash that sucks you in, keeps you glued and leaves you exhausted and upset. It’s a great example of how to apply social conscience with a battle hatchet, then doctor it using a rusty scalpel.

With Lillian Hellman adapting the screenplay from Horton Foote’s play, with Sam Spiegel putting up some of the dough he made from Lawrence of Arabia, with psyche-stylist director Arthur Penn helming a plum cast headed by Marlon Brando, people expected more than the sprawling hysteria of masochistic WASP guilt: Peyton Place on the Pecos, 1966.

‘Bubber Reeves’ escapes from the slammer and is on his way back to the Texas burg he ‘done went bad’ in. Waiting for him is the most fermented collection of lechers, louts, lickspittles and loose ladies any righteous leftist ever ruined a quiche over. Everyone is screwing everyone else, literally and figuratively. Maybe it’s the humidity that makes Cinema Southerners sin so.

The biggest sap in town is the decent Sheriff, absorbing all the burg’s spite and punishment in the person of Citizen Brando. By this stage in his careers downhill canter, the customary mush in Marlon’s mouth had begun to congeal into a lumpy state, but he’s better here than in most of his output from the era. Speaking of lumps, the crescendo comes when Brando receives one of the bloodiest pulpings in movie memory. Subtext: he’s taking it on behalf of all of us. Thanks.

The production was renowned for squabbles between writer, director, producer and star, all pulling in Democratic disharmony for their own vision of how Mayberry should sit up and void. It bombed here, with a $4,600,000 take that put it #47 for ’66, losing big against a cost of $5,660,000, but it was hailed in Europe, where sneering at American gaucherie apparently compensates for 2,000 years of history. It was especially gushed over in France, where Jerry Lewis was considered a comic genius. 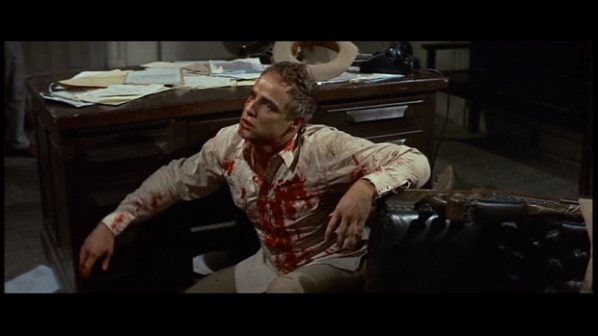