OUR MAN FLINT  reigns as the best in the crop of Johnson-era spy-spoofs that rode the enormous success of the Bond films.  In 1966 it hit ‘ka-ching’ , judo-chopping its way to #17 on the hit list (some $16.000,000 here in the US, tagging another $12,000,000 abroad). Though Dean Martin’s first ‘Matt Helm’ secret agent lark The Silencers  went three spots higher on the roster, and its bastard grandchildren, the ‘Austin Powers’ sagas (spoof of spoof of spoof), took grosses into outer space, this oldie set the bar. It still provides laughs, and the sentimental pull for its original fans is hard to resist.

Derek Flint is the deadliest, most brilliant, cultured, irresistible guy in the entire World. Luckily, he works for us, through Z.O.W.I.E.—the Zonal Organization for World Espionage and Intelligence (zonal?), using his 82-function cigarette lighter —“83 if you want to light a cigar“.  He manages, when not saving civilization, to service his own private harem at his swank pad.

This zany actioner brought front-rank stardom to James Coburn.  While he had numerous good roles in better films, from eleven lines as zen gunfighter ‘Britt’ in The Magnificent Seven, to a career-topper Oscar for supporting Affliction , 37 years later, this will be the part he’s best remembered for.  Lanky and laid back, lethal and likable. 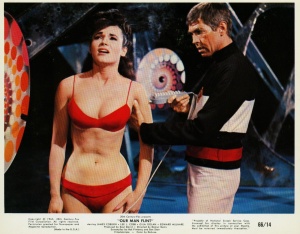 As long as we’re loading ‘L’s, let’s let loose and lay luscious on co-star Gila Golan, who our hero must rescue from the bad guys— intent on changing the planet’s weather patterns to blackmail governments (they should have waited a few years).  A Polish WW2 Holocaust orphan, Golan went from being abandoned in a bundle at a train station to modeling in Israel, broke into movies for a brief swing, married a tycoon, and apparently now runs an investment house.

One thought on “Our Man Flint”