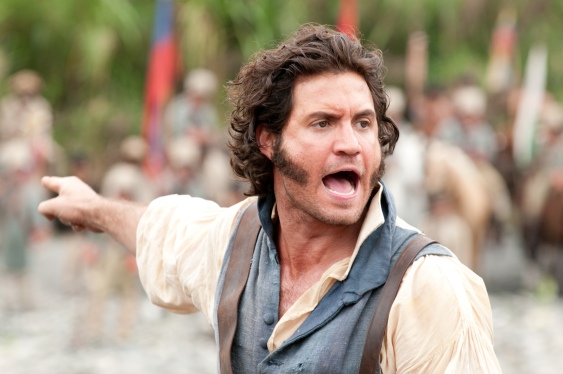 THE LIBERATOR –like its title subject, sets out to cover a lot of ground, is conflicted, has some spectacular successes, but doesn’t finish its work.  To the hundreds of millions of ‘Americans’ who live in the southern part of the hemisphere, Simon Bolivar is Washington, Lincoln and both Roosevelt’s rolled into one.  For the teency amount of Norte Americanos who have even heard the name, he remains more distant than Napoleon.  Born into aristocracy in Venezuela, radicalized by Enlightenment thinkers, he led the revolt of South American colonies against Spain from 1808 to 1830.  So you have historical biography-with-action going on.

The  main issue that works against it is that the complexity, scale and sheer numbers of Bolivar’s victories and defeats, his friends and enemies, and the depths of his own often contrary nature are just too vast to boil down to 119 minutes.    The guy didn’t lead two or three big wingdings (Braveheart)—he fought a hundred  battles, he had lovers by the score, was allied with and double-crossed by a regiment of characters big-as-life in their own right.  He brought about the breakaway from Spain of Venezuela, Colombia, Ecuador, Peru and Bolivia.  You think Lawrence of Arabia had his hands full?  He was on a picnic compared to Simon Bolivar.  It helps a lot for the enjoyment of this film if you’ve read something about him first: the suggestion I’ll give is “Bolivar”, by Maria Arana.

Played with proper energy and passion by Edgar Ramirez, the Bolivar of the film is sketched through vignettes that cram as many of his acquaintances into the script as it can hold, directed with some panache by Alberto Arvelo, who spent $50,000,000 of someone’s stash—the most ever for a Latin American production.  The scripting of it all will likely be a bit confusing, and it rather assumes you are familiar enough with geography and basic history to follow, which is going to leave spoon-fed watchers trying to remember who’s who and where they are in relation to each other amid all the activity.

It’s great to look at, thanks to cameraman Xavi Gimezez, with stunning, unfamiliar landscapes of the Venezuelan rivers, jungles, the Andes.  Plenty of period costumes.  Big battles, well done.  A stirring feature of the massed extras following Bolivar into action is the highlighting of the multi-ethnic, multi-agenda mix his revolution drew—Creoles, Indians, African slaves, whites, Irish volunteers, scoundrels, women fighting along with the men in staggering hardship–crossing the Andes in winter. Epic stuff.  Okay score from Gustavo Dudamel.  With Maria Valverde, Danny Huston, Juana Acosta and Erich Wildpret.  Reviews for the thoughtful 2013 spectacle were mixed, box-office above the border was nonexistent.