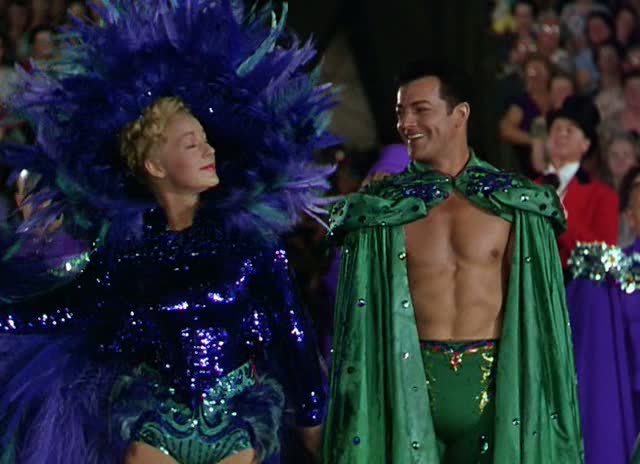 THE GREATEST SHOW ON EARTH is the DeMille version of life under and behind the Big Top. This gargantuan blast of hoke, hoopla and hot air was a huge box-office smash (adjusted for inflation its take would amount to a three-ring $350,000,000 today) and somehow took 1952’s Best Picture Oscar from The Quiet Man, Moulin Rouge, High Noon and Ivanhoe–all on the roster and all much better, and edged out Singin’ In The Rain.  The World, it would appear, lacks justice.

Girl amused by clown will grow up to become psychopath

It’s so fearlessly bad you might enjoy it, though at 153 minutes you’ll begin to seriously reconsider your Role In Life before it wraps up. The clichéd script drops bad lines by the score, the narration (by Cecil B. himself) is riotously somber, most of the acting is pretty bad.

Charlton Heston and James Stewart do what they can, but Cornel Wilde as an amorous acrobat will make you blanche, and as for Betty Hutton (palms up) and Gloria Grahame—they manage to make Dorothy Lamour (“present!,C.B.”) seem like Katherine Hepburn.

One loud and flashy circus act after another is trundled by your supposedly bulging eyes, but the cumulative effect is numbing rather than exhilarating.  1,450 performers do their shticks in 85 acts, with suitably dazzling Technicolor, as a glowering Heston tries to referee all the jealousy and rivalry. Great bad guy Lyle Bettger is fun as ‘Klaus’,the hissable Teutonic lion tamer. Henry Wilcoxon, Emmett Kelly and Lawrence Tierney round things out.

The most impressive bit is in the last half-hour, when two trains pile into each other—it’s an old-time special effects coup. Bonus: the lions get out! 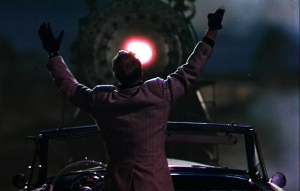 DeMille was nominated for his Direction, plus the Film Editing (decent) and Costume Design (gaudy,but it is a circus) were in competition. It won for Best Story (don’t ask).

A batch of guest stars are thrown in for the hell of it–Bob Hope and Bing Crosby, William Boyd, Edmond O’Brien, Mona Freeman. The Academy  also bestowed DeMille with its Irving G. Thalberg Memorial Award, to boot (sheesh).

Now, which car are the Academy’s voters in?