THE HUNCHBACK OF NOTRE DAME  received its greatest screen treatment in this triumphant 1939 version, with RKO sparing no expense to recreate 15th-century Paris with vast sets, 3,000 extras and a classic interpretation of Quasimodo from Charles Laughton.

Laboring under pounds & hours of makeup, the real-life agony of Laughton’s insecurities played out through his prodigious talent to unforgettably paint the lonely misery of the misshapen, misunderstood bell-ringer.  Backing pere Charles, director William Dieterle marshaled a grand cast of character actors to stand out from that milling throng of rabble-roused Parisians.

Working his own demons into an interpretation of the good-hearted, solace-deprived hunchback, Laughton speaks for the anguished souls of all those cruelly, casually overlooked. The role has unavoidable sympathy-factor built-in (partly why so many awards go to actors playing disabled characters).   Laughton’s genius not only took the considerable physical projection needed—movement, posture, attitude— and fully captured it, it’s his line readings that pierce through sentiment to honor grace.  The pathos is sublime. His ecstasy ringing the bells is simply pure. 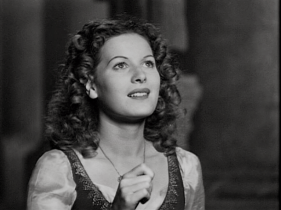 New kids on the block were Edmond O’Brien—slim, handsome and energetic at 24—and a fetching 19-year old beauty named Maureen O’Hara as ‘Esmeralda’.  Vivid impressions from Cedric Hardwicke (unadulterated medieval-Church malice), Thomas Mitchell, Harry Davenport and George Zucco.  On-the-groom Robert Wise helped with the superb editing, Alfred Newman did the Oscar-nominated score (Sound was also up for one of the little gold guys), Joseph H. August did the deep focus camera work.

It was a hit, coming in at #9 for the years releases, although its cost of nearly two million dollars booked but a narrow profit.  The  stunning mockup of the cathedral stood 190 feet high, an island of beauty in the squalor, depravity, cruelty and superstition of the period, starkly realized in the detailed production design and costumes.  Sonya Levien’s script is appropriately literate, so Victor Hugo can rest easy—everything works in yet another all-out classic from that never-topped 1939 array.