COME DANCE WITH ME  won’t strain the brain, but goes easy on the eyes as another pretty color showcase for the beauty of Brigitte Bardot, here at a ravishing 25.  Released in France in 1959 (a year later in the U.S), it has just a few bits of the teasing ‘adult’ material that homegrown audiences sneaked off to see at the few theaters that booked foreign films. 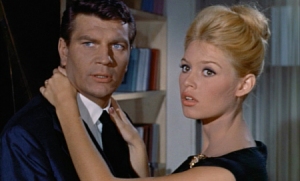 This time BB is part of a comedy-mystery, involving the blackmail of her dentist husband by a wicked dance teacher. The husband is played by Henri Vidal, a big star in France who died shortly after this was made, age 40, after many years battling drug addiction (13 rehab attemps). The plotting bad girl in the mix is Dawn Addams, no mean looker herself.

One thing I’ve noticed in my rediscovery of Bardot is that, along with her obvious charms and talents, she possessed the confidence to have any number of attractive co-stars share the screen with her, something many other leading ladies would shy from or assuredly see to re-arrange in the editing room. Doesn’t look like it flummoxes the divine Brigitte any.

Unfair to those of us who live normal lives.