The naughty 1961 novel sold over eight million copies, making it one of the most widely read books in history.  This 1964 movie teases where the book slathered, but it racked up a huge worldwide gross of $40,000,000, the 4th biggest hit of the year.  People wanted sex, and they apparently wanted it raunchy, with a lot of power and money in the mix. 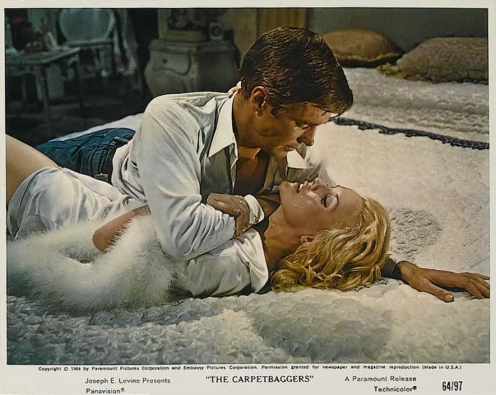 Story covers the life and loves of a dashing, bitter, ruthless business maverick, patterned after Howard Hughes.  Played to a heel-hilt by George Peppard (who allowed a good deal of his own ego to mark the production), stops-out lust by Carroll Baker, in one of the landmark sexpot gambols of the era, and Alan Ladd, doing his best work in years in his final role (he died, 51, before the movie debuted).

Bob Cummings eats ham with relish as a totally sleazy agent, Elizabeth Ashley gives stardom a shot as one of the few nice people in the story, and there are good turns from Martha Hyer and Martin Balsam.

Edward Dmytryk directed; Elmer Bernstein starts it off with an audacious blast of driving, sexy music.  Publicized like mad before it came out, there’s little subtlety at work in this notorious saga.  It’s not exactly ‘fun bad’ trash like Valley Of The Dolls, since it’s played so well, though there are a number of hard-breathing moments that rise to camp glory, and the finale has one of the most abrupt behavioral about-faces you could concoct outside of looking into the mirror and telling yourself you’ll never drink again.