ZULU DAWN—– Lavishly produced, beautifully lensed at expansive and remote locations, armed with a pounding score, pedigree cast and rip-bloody-roaring with one of the biggest, best designed battles in history movie Valhalla, this orphan epic was abysmally marketed in 1979, slighted by critics and has been poorly served in its video lives.  A royal kraal shame, as it’s an intelligent spectacle that at least tries for greatness and sometimes hits it.

Laid back director Douglas Hickox fortunately had some outstanding second-unit sergeants working the 13,000 Zulu extras and the hundreds of redcoated Brits that they avalanche.  A prequel to the 1964 classic Zulu, it was conceived ten years later by the writer-director of that rouser, Cy Endfield, and its star, Stanley Baker. They both passed away before the money-men came in, so the script from Endfield and Anthony Storey was handed to Hickox, and a sterling cast signed on. The tale tells the story of the catastrophic Battle of Isandlwana in 1879s South Africa.   In a nutshell (or spent .303 cartridge), the arrogant English try to force the not exactly kittenish Zulus to yield property in gorgeous Natal colony (northeast of modern Durban). Pilot error!

Burt Lancaster does soso with his Irish-accented hero but at 64 he certainly has Movie Star Charisma to spare and his go-down-swinging exit is up there with Laurence Harvey’s ‘Col. Travis’ in The Alamo.  Peter O’Toole provides proper wasting-away-with-decay snottiness and Simon Ward mans the most stunning palomino south of the Zambezi. 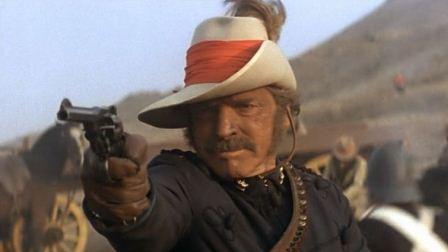 “We come here by the orders of the Great Queen Victoria, Queen of all Africa.”  Various levels of valor, smugness and gulp-we’re-screwed come about from Bob Hoskins, Denholm Elliott, John Mills, Michael Jayston and Peter Vaughan. Elmer Bernstein’s score is one of the best of his latter career, and the final credits roll backed by a rousing Zulu chant that pleads to be cranked up loud enough for your neighbors to flee to high ground.

Based on material then available (with history, new stuff always comes to light after people think a subject is wrapped up), the screenplay is pretty accurate and the battle scenes are simply extraordinary.*  Current Blu-Ray release has the correct 115 minutes and the proper framing, but they bollixed on the sound–it’s mono instead of the original stereo and muffled enough you have to fiddle with your volume while trying to widen your eyes at the awesome landscapes and the ‘what idiot sealed the ammo boxes!?’ combat.

Cost estimates for this criminally underrated, exciting spectacle vary between $9-15,000,000 but it was a wipe-out indeed when it only returned $1,900,000. With Ronald Lacey, James Faulkner, Nigel Davenport, Christopher Cazenove, David Bradley, Phil Daniels, Freddie Jones and Ken Gampu. 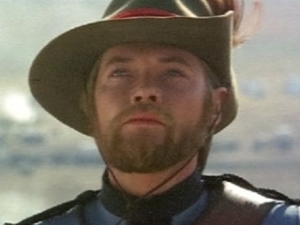 * One fascinating item the film-makers left out was the sudden, unexpected, doom-heralding appearance of a solar eclipse, at the height of the battle. This epic impressed me so much that when I visited South Africa I made a special trip to the remote interior of Natal, with a wonderful Zulu guide—a smart and engaging lady named Zee—and despite having a toothache that felt like it was 1879, I hiked all over the isolated, haunting field at Isandlwana, grateful that I was joking with a single friendly Zulu maiden instead of trying to out-sprint 20,000 pissed off warriors.