WILD RIVER  flowed into and out of theaters in 1960, not even recouping its $1,600,000 budget.  Outrageously overlooked by the Oscars, applauded and then filed away by critics, criminally ignored for decades, this beautiful Elia Kazan drama at long last gets its due thanks to DVD & Blu-Ray.

A stunning opening sequence of b&w documentary footage shows the Tennessee River at flood, with a heartbreaking interview of one stunned man relating the death of his entire family.  Shifting to color and evocative Tennessee location filming, the story involves a US government field administrator and his attempts to convince one supremely stubborn old woman to relocate so FDRs “guvmint” can complete a dam project.  He becomes involved with her granddaughter in the meantime; some less-than-helpful locals complicate things even further.

It was Kazan’s favorite film (he scripted & directed), certainly along with America America his most personal.  There’s not a false note throughout.  From the mature handling of the tentative romance, the matter-of-fact look at racial issues (circa 1934), and its even-handed ponder of the virtues and costs of progress with the dichotomy between individualism and community, it’s all put over with a refreshing absence of any phony theatrical ‘folksiness’ depicting its rural characters. Deep drama without histrionics. A social history lesson without polemics.

Montgomery Clift is the TVA agent: his best work since From Here to Eternity.  Clift’s physical frailty and slightly off-center delivery mesh to just the right degree with his character. You don’t really warm to him—both actor and character remain outsiders— but the invention and sincerity of the playing bypasses what for other actors may have been an easier ‘please like me’ approach.

Watchable as he is, he’s gone one better by a courageously honest, unaffected Lee Remick who carries enough hurt, loss, faint hope, and natural sexuality that you feel you’re watching a real person the camera happened upon instead of a gifted actress. Sans makeup—for a leading lady?—age 24, in 1960?—how many actresses had that confidence?

Using makeup then, (five hours worth!) expertly, along with sublime body language and withering vocal effect is Jo Van Fleet, who was 46 but plays the old woman in her 80s. She’s simply magnificent. Her penetrating, baleful gaze looks like it could stop a flood by itself.

Not a single Oscar nomination!  Liz-sympathy won Best Actress for Butterfield 8, and that right there tells you there was at least room on the list for Remick, while Shirley Jones, fine in Elmer Gantry as a Supporting winner simply can’t hold a candle to Van Fleet, who looks like she could eat Jones’ tough hooker in Gantry for breakfast. 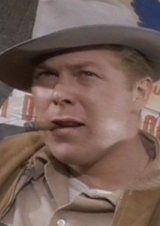 Salmi up to no good.

Kazan’s script is superior, and he made his usual adroit casting choices of supporting actors and bit players.  Albert Salmi is uncomfortably believable as a mean ‘good old boy’; the great Jay C. Flippen gets some choice slices; Barbara Loden scores briefly in her first film (enough for Kazan to eventually marry her); the unsung—and here regrettably uncredited– Robert Earl Jones is a model of simple dignity.  Bruce Dern, 24, has his first job.  With Malcolm Atterbury, Frank Overton and James Westerfield.  That hulking, silent ‘feller’ who looks like he could tear a tree in two went by the name of Big Jeff Bess. 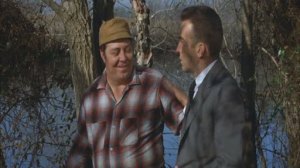 While many movie fans are familiar with Clift’s troubles, I heartily recommend adding to your enjoyment of this classic piece of Americana by looking up some background on Salmi, Loden and Jones: there’s enough success/failure drama between those three to fill a documentary.  The eventual career paths and fates of Remick and Van Fleet are likewise illustrative.  Remick regarded this as her best work and credited Kazan for guiding her. 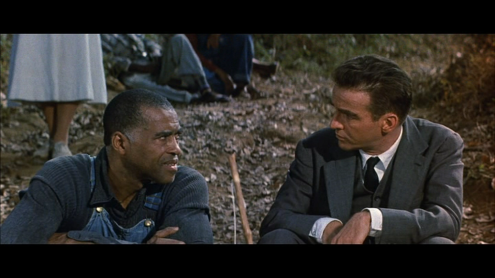