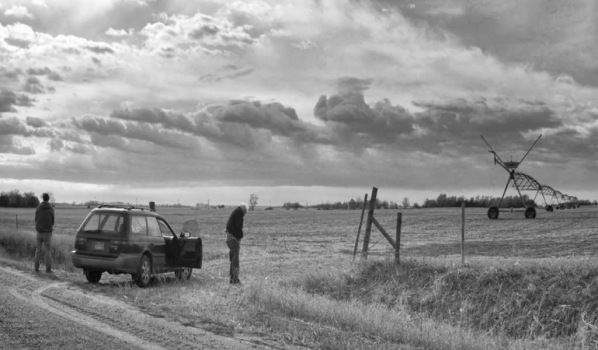 NEBRASKA  initially gave me a bit of that wrinkle-shoulders-warning-feel I get when I see critics line up in near-unanimity to declare a small-scale comedy-drama “compelling” or (begin to shudder) “essential”—I’m thinking the dreaded Juno—so I approached with a bit of hesitation.  Hearing “daringly shot in black & white” and “the great Bruce Dern” didn’t grease the brakes on the pickup a whole lot either.

Well, teach me to pre-scoff, because this a keenly observed, funny, trenchant look at forgotten America (Corn Belt meets Rust Belt strain—Wind Belt?) and Dern at long last gets something approaching a normal human to play.  Not likable, mind you: can Bruce Dern even be likable?  He’s very good here; cranky without any fakey sympathy-guilt-trip, dry as an empty silo, consistent and spot-on, though the plaudits he received—and the Best Actor Oscar nomination—took away luster from the likewise impressive, but less showy Will Forte.

A life-fatigued son takes on the ‘family duty’ (with not much help from the rest of the ‘relation’) of escorting his irascible (see ‘pain-in-the-ass’) elderly father on a road trip to claim a prize the old man is convinced he’s won.

Director Alexander Payne deftly guides the 2013 sleeper through writer Bob Nelson’s 115 mostly worthy minutes (maybe ten too many), with a canny assist from cinematographer Phedon Papamichael, whose lensing recalls Robert Surtees beautiful work on The Last Picture Show. Done for $13,500,000, it covered the bet by grossing $27,700,000, nesting at 112th place that year.

Aside from Dern, the Picture itself, its direction, script, and camerawork were Oscar nominated as well as an element I had more trouble buying, a Best Supporting Actress nomination for the diminutive 83-year old June Squibb. I just didn’t think her cantankerousness, let alone some laugh-pandering crudity, rang truthful.  But, hey, everyone else with a keyboard thought she was the most delightful thing since myrtleberry jam, so why carp? 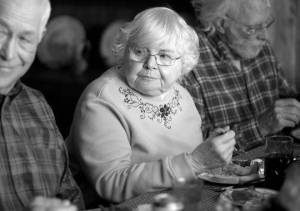 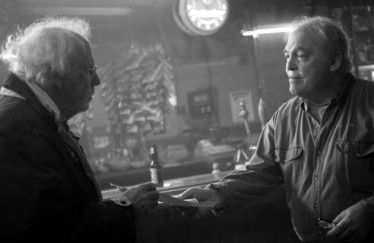 Perhaps also a tad overdone, but less grating and more acceptable to me as ‘types’ were the oaf cousins played by Devin Ratray and Tim Driscoll, and the loud-mouthed Tavern Big Shot acted to a razor-edge by the always welcome Stacy Keach.  With Bob Odenkirk. 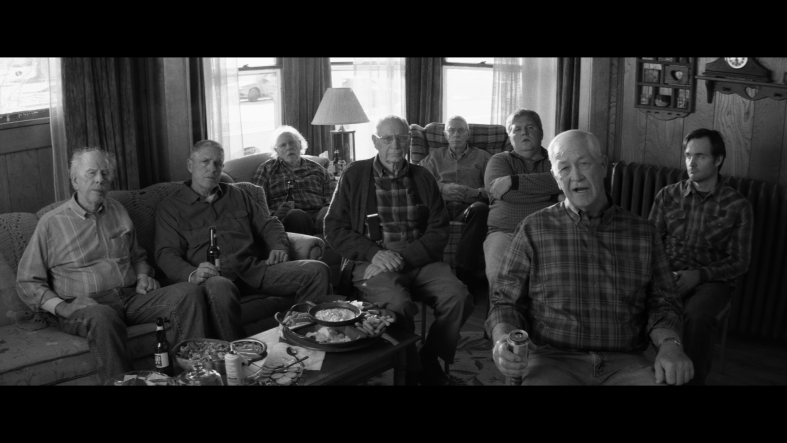