SOMEONE LIKE YOU, a 2001 romantic comedy, has a more personable cast array than you could hope to whip up—Ashley Judd, Hugh Jackman, Marisa Tomei and Greg Kinnear. 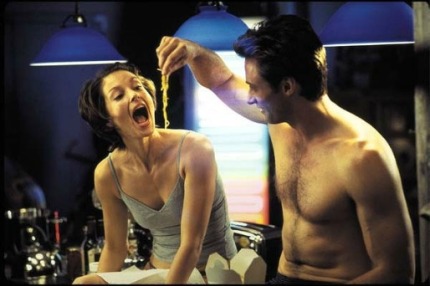 Jilted by her boyfriend, magazine writer Judd expounds on her theory that men’s (The Evil Ones) mating habits resemble wildlife–specifically bull v. cow—and her articles end up making her a nationwide sensation. Could this complicate any future relationship?  Don’t ask, just park your bitterness for a while–you can renew it in the morning—and enjoy some fairly gentle fun-poking at that most delicate of life’s quandaries: is there someone for me?–who I can stand to be with? (okay, okay– and vice versa).

Now take your angry pinkies off the keyboard, pick up that second glass of wine and try to resist the urge to apply your demons to a 97-minute bit of snappy escapism. With Ellen Barkin. Directed by Tony Goldwyn. Made for $23,000,000, it grossed $38,690,000.