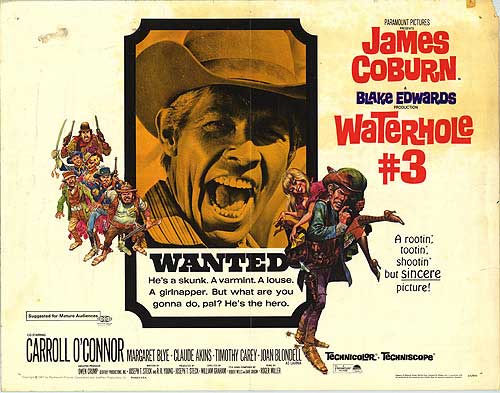 WATERHOLE # 3  amused me as a 12-year-old at a 1967 matinee.  Some years later, in the mid-70s, watched it on TV with a buddy: we both thought it was hilarious.  Well, that shows you how good pot was back then, because it’s a truly lame ‘comedy’-western, with maybe eight or ten chuckles, an uncomfortable rape-joke subplot, hobbled with Geritol direction and staging so poor that the good cast appear adrift, stuck improvising with the wafer thin material.

Is Flint begging Archie to put this movie out of their misery? 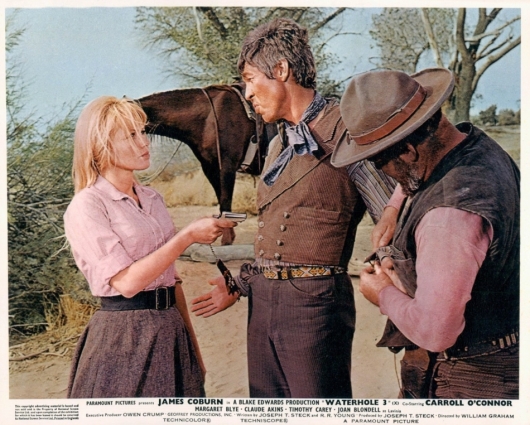 Only some seriously nice scenic shots of California desert locations from cameraman Robert Burks merit applause.  Roger Miller sings an accompanying ballad: it gets pretty old—one reviewer suggested that Millers trademark scat, which erupts once or twice, was like hearing a deranged monkey on speed.  Blake Edwards produced but didn’t take credit.  William A.Graham was the director; he’d done some very good TV movies–-21 Hours at Munich, The Amazing Howard Hughes and Guyana Tragedy:The Story of Jim Jones, but whatever oomph he put into those jobs went in the drink when
they dug this hole. Of films released that year, this hobbled in to a dry spot #73.