THE EDGE , unless you want to look too closely and spoil the fun, is a cool survival-in-the-wilds adventure.  It features two fine actors, gorgeous Canadian Rockies locations, some amusing exchanges of David Mamet dialogue and battles to the death with a giant, human-hungry Kodiak bear.

Director Lee Tamahori gets brainy billionaire  Anthony Hopkins, troublesome bigmouth  Alec Baldwin and frightened ‘black dude dies first’ Harold Perrineau, crashes their plane in a mountain lake and has them face nature: elemental, animal and human.  Back at the lodge are flirty model/trophy wife ElleMacpherson and cagey outdoorsman L.Q.Jones.  In between: mountains, rivers,and something hungry that weighs 1500 pounds and has sharp teeth.  Getting back to Elle entails going mano a mano  (trio y urso?) with the majestic, convincingly ferocious ‘Bart the Bear’, all 9 feet, six inches of him.

Critics did a 60/40 split, all giving good marks to Hopkins and the bear action, many clawing holes in convenient situational logic.  Right in both camps.  There are enough “nah,I don’t think so” pieces that you could build a cabin from them, but as the 117 minutes colorfully rush by you’ll likely be too caught up in the awesome visuals and primal “oh shit, not good” situations to care.

Hopkins had a great ‘working relationship’ with the late Bart from Legends of the Fall and their tussling here benefits from typically effective Jerry Goldsmith scoring.  If you’ve been fortunate enough to backpack up in Alberta you’ll recognize some of those magnificent Banff vistas.   The 1997 face-off (paw-off?) did decent business of $42,000,000.   An intellectualized update of the sort of Mens Adventure stories that used to be in pulp magazines like “Stag”, with awesome heroic kitsch artwork on the cover featuring guys battling apes, pythons, Nazis and–of course–bears, often while protecting some buxom, half-dressed screaming ‘dame’.  Slap this on for an entertaining double-bill with The Grey. Chill out.   Be twelve. 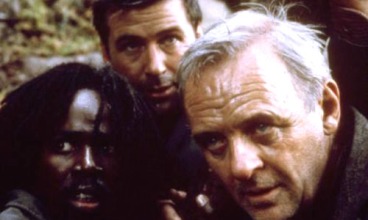 Q. Which cast member will not make it to Act 3?