BEGINNING OF THE END  hops into a class-D-for-dumb cooker, as locusts eat big radiation-grown vegetables (another wise science project) and grow to Alarming Proportions Which Require Armed Intervention. Using ‘military intelligence’, The General (Morris Ankrum) decides the only way to save Chicago is to drop an A-bomb on it.  But first a number of hapless soldiers must be devoured, and a Dish in a Towel must be threatened by a bug-eyed stalker. 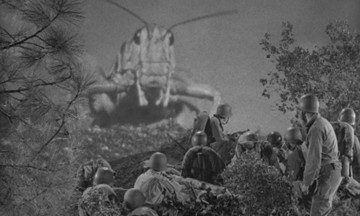 Peter Graves is the scientist who owes much of the Midwest an apology (‘I wanted food for you, not you for food’), and Peggie Castle is the reporter who owes her acting coach an explanation (‘this dog of a movie ate my performance’).  Director/empresario Bert I. Gordon imported 200 grasshoppers from Texas, but they cannibalized each other and only 12 survivors stood poised for placement on top of cut-outs of the Wrigley Building or for magnified superimposing against their human snacks. Despite reviews that would griddle a boulder, the indefatigable Gordon followed that same 1957 with The Cyclops and The Amazing Colossal Man. 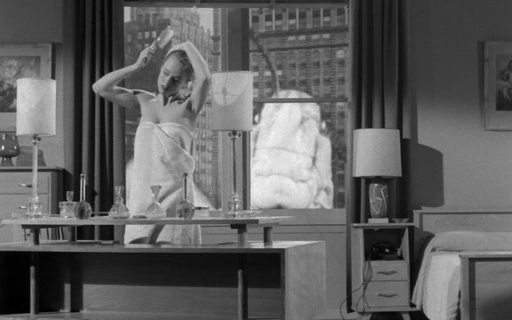 Kids of the era related to Peter Graves not because he told us to eat our basketball-size radishes but because for five years he was ‘Jim Newton’, the Dad on TVs Fury–-so trust was implicit.  Sexy Peggie Castle could scorch WASPs at 30 yards: named “Miss Classy Chassis” by a seven-state canvas of members of the United Auto Workers Union, Peggy was quoted: “Let’s face it. Nobody likes nice women on the screen. Nice women are dull.”  Bus-sized, chirping, carnivorous grasshoppers are not, if you’re five or six years old (though even then I could see they used some of the same shots two or three times.) To be precise (like the science in this movie), grasshoppers don’t chirp–they “crepitate”, a word my mom used to bandy in merriment—and I always figured it meant, well, something else. They also “stridulate”, so don’t tell me I haven’t provided some darn useful information.  With Thomas Browne Henry and Richard Benedict. 76 minutes, give or take a crepitate.